CSP is being widely commercialized and the CSP market has seen about 740 MW of generating capacity added between 2007 and the end of 2010. More than half of this (about 478 MW) was installed during 2010, bringing the global total to 1095 MW. Spain added 400 MW in 2010, taking the global lead with a total of 632 MW, while the US ended the year with 509 MW after adding 78 MW, including two fossil–CSP hybrid plants.

CSP growth is expected to continue at a fast pace. As of April 2011, another 946 MW of capacity was under construction in Spain with total new capacity of 1,789 MW expected to be in operation by the end of 2013. A further 1.5 GW of parabolic-trough and power-tower plants were under construction in the US, and contracts signed for at least another 6.2 GW. Interest is also notable in North Africa and the Middle East, as well as India and China. The global market has been dominated by parabolic-trough plants, which account for 90 percent of CSP plants.

What technology is involved?

A parabolic trough consists of a linear parabolic reflector that concentrates light onto a receiver positioned along the reflector’s focal line. The receiver is a tube positioned directly above the middle of the parabolic mirror and filled with a working fluid. The reflector follows the sun during the daylight hours by tracking along a single axis. A working fluid is heated to 150–350 °C  (423–623 °K) (302–662 °F) as it flows through the receiver and is then used as a heat source for a power generation system. Trough systems are the most developed CSP technology. The Solar Energy Generating Systems (SEGS) plants in California, the world’s first commercial parabolic trough plants, Acciona’s Nevada Solar One near Boulder City, Nevada, and Andasol, Europe’s first commercial parabolic trough plant are representative, alongside with Plataforma Solar de Almería’s SSPS-DCS test facilities in Spain. 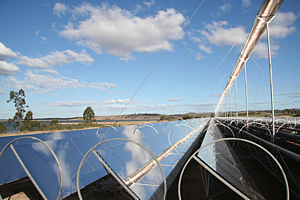 Fresnel reflectors are made of many thin, flat mirror strips to concentrate sunlight onto tubes through which working fluid is pumped. Ground positioned mirrors allow more reflective surface in the same amount of space as a parabolic reflector, thus capturing more of the available sunlight, and can withstand high wind load. Fresnel reflectors can be used in various size CSPs.

A dish Stirling or dish engine system consists of a stand-alone parabolic reflector that concentrates light onto a receiver positioned at the reflector’s focal point. The reflector tracks the Sun along two axes. The working fluid in the receiver is heated to 250–700 °C (523–973 K (482–1292 °F)) and then used by a Stirling engine to generate power. Parabolic-dish systems provide the highest solar-to-electric efficiency among CSP technologies, and their modular nature provides scalability. The Stirling Energy Systems (SES) and Science Applications International Corporation (SAIC) dishes at UNLV, and Australian National University’s Big Dish in Canberra, Australia are representative of this technology.

A solar power tower consists of an array of dual-axis tracking reflectors (heliostats) that concentrate sunlight on a central receiver atop a tower; . The working fluid in the receiver is heated to 500–1000 °C (773–1273 °K ) (932–1832 °F) and then used as a heat source for a power generation or energy storage system. Power-tower development is less advanced than trough systems, but they offer higher efficiency and better energy storage capability. The Solar Two in Daggett, California and the CESA-1 in Plataforma Solar de Almeria, Almeria, Spain, are the most representative demonstration plants. The Planta Solar 10 (PS10) in Sanlucar la Mayor, Spain is the first commercial utility-scale solar power tower in the world. eSolar’s 5 MW Sierra SunTower, located in Lancaster, California, is the only CSP tower facility operating in North America currently.
Copyright © 2012 · Rayer Ltd